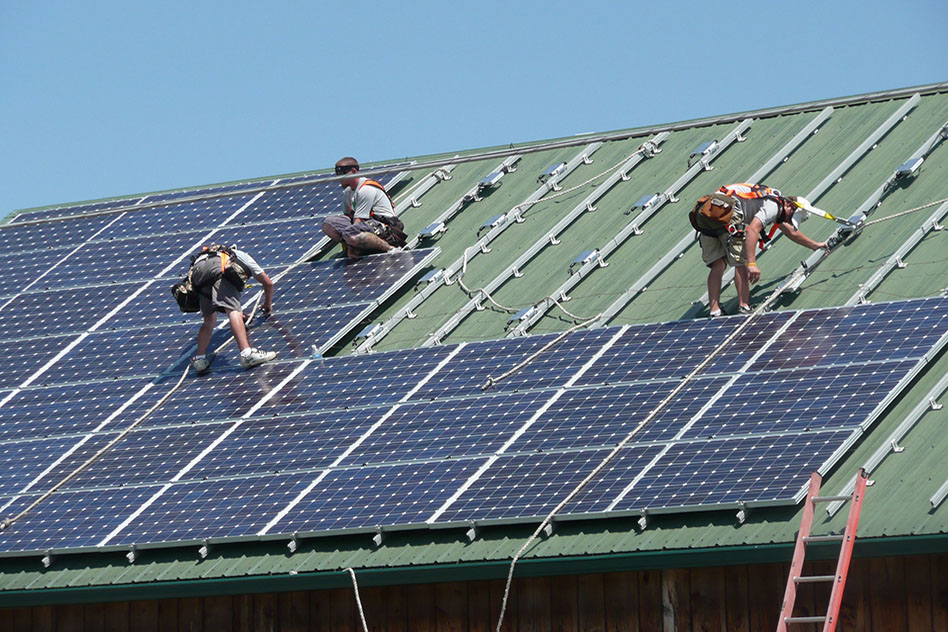 Mark Dwortzan | MIT Joint Program on the Science and Policy of Global Change
Photo: A Clean Air Act provision could enable the U.S. to accelerate the transition away from fossil fuels and toward low- and zero-carbon energy sources (Source: Flickr/U.S. Department of Agriculture)

The most recent United Nations climate change report indicates that without significant action to mitigate global warming, the extent and magnitude of climate impacts—from floods to droughts to the spread of disease—could outpace the world’s ability to adapt to them. The latest effort to introduce meaningful climate legislation in the United States Congress, the Build Back Better bill, has stalled. The climate package in that bill—$555 billion in funding for climate resilience and clean energy—aims to reduce U.S. greenhouse gas emissions by about 50 percent below 2005 levels by 2030, the nation’s current Paris Agreement pledge. With prospects of passing a standalone climate package in the Senate far from assured, is there another pathway to fulfilling that pledge?

Recent detailed legal analysis shows that there is at least one viable option for the U.S. to achieve the 2030 target without legislative action. Under Section 115 on International Air Pollution of the Clean Air Act, the U.S. Environmental Protection Agency could assign emissions targets to the states that collectively meet the national goal. The President could simply issue an Executive Order to empower the EPA to do just that. But would that be prudent?

A new study led by researchers at the MIT Joint Program on the Science and Policy of Global Change explores how, under a federally coordinated carbon dioxide emissions cap-and-trade program aligned with the U.S. Paris Agreement pledge and implemented through Section 115 of the Clean Air Act, the EPA might allocate emissions cuts among states. Recognizing that the Biden or any future Administration considering this strategy would need to carefully weigh its benefits against its potential political risks, the study highlights the policy’s net economic benefits to the nation.

The researchers calculate those net benefits by combining the estimated total cost of carbon dioxide emissions reduction under the policy with the corresponding estimated expenditures that would be avoided as a result of the policy’s implementation–expenditures on healthcare due to particulate air pollution, and on society-at-large due to climate impacts.

Assessing three CO2 emissions allocation strategies (each with legal precedent) for implementing Section 115 that return cap-and-trade program revenue to the states and distribute it to state residents on an equal per-capita basis, the study finds that at the national level, the economic net benefits are substantial, ranging from $70 to $150 billion in 2030. The results appear in the journal Environmental Research Letters.

“Our findings not only show significant net gains to the U.S. economy under a national emissions policy implemented through the Clean Air Act’s Section 115,” says Mei Yuan, a research scientist at the MIT Joint Program and lead author of the study. “They also show the policy impact on consumer costs may differ across states depending on the choice of allocation strategy.”

The national price on carbon needed to achieve the policy’s emissions target, as well as the policy’s ultimate cost to consumers, are substantially lower than those found in studies a decade earlier, although in line with other recent studies. The researchers speculate that this is largely due to ongoing expansion of ambitious state policies in the electricity sector and declining renewable energy costs. The policy is also progressive, consistent with earlier studies, in that equal lump-sum distribution of allowance revenue to state residents generally leads to net benefits to lower-income households. Regional disparities in consumer costs can be moderated by the allocation of allowances among states.

State-by-state emissions estimates for the study are derived from MIT’s U.S. Regional Energy Policy (USREP) model, with electricity sector detail of the Renewable Energy Development System (ReEDS) model developed by the U.S. National Renewable Energy Laboratory; air quality benefits are estimated using U.S. EPA and other models; and the climate benefits estimate is based on the social cost of carbon, the U.S. federal government’s assessment of the economic damages that would result from emitting one additional ton of carbon dioxide into the atmosphere (currently $51/ton, adjusted for inflation).

“In addition to illustrating the economic, health and climate benefits of a Section 115 implementation, our study underscores the advantages of a policy that imposes a uniform carbon price across all economic sectors,” says John Reilly, former Co-Director of the MIT Joint Program and a study co-author. “A national carbon price would serve as a major incentive for all sectors to decarbonize.