Does Revolution Work? Evidence from Nepal 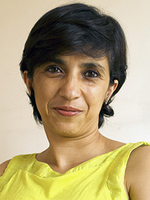 The last half century has seen the adoption of  democratic institutions in much of the developing world. However, the conditions under which de jure democratization leads to the representation of historically disadvantaged groups remains debated as do the implications of descriptive representation for policy inclusion. Using detailed administrative and survey data from Nepal, we examine political selection in a new democracy, the implications for policy inclusion and the role of conflict in affecting political transformation. I situate these findings in the context of the political economy literature mapping institutional choice to power and inequality.

Rohini Pande is the Henry J. Heinz II Professor of Economics and Director of the Economic Growth Center, Yale University. She is a co-editor of American Economic Review: Insights.

Pande’s research is largely focused on how formal and informal institutions shape power relationships and patterns of economic and political advantage in society, particularly in developing countries. She is interested the role of public policy in providing the poor and disadvantaged political and economic power, and how notions of economic justice and human rights can help justify and enable such change. Her most recent work focuses on testing innovative ways to make the state more accountable to its citizens, such as strengthening women’s economic and political opportunities, ensuring that environmental regulations reduce harmful emissions, and providing citizens effective means to voice their demand for state services. In 2018, Pande received the Carolyn Bell Shaw Award from the American Economic Association for promoting the success of women in the economics profession. She is the co-chair of the Political Economy and Government Group at Jameel Poverty Action Lab (J-PAL), a Board member of Bureau of Research on Economic Development (BREAD) and a former co-editor of The Review of Economics and Statistics. Before coming to Yale, Pande was the Rafik Harriri Professor of International Political Economy at Harvard Kennedy School, where she co-founded Evidence for Policy Design.