The Opportunity Atlas: Mapping the Childhood Roots of Social Mobility

Abstract:
We construct a publicly available atlas of children’s outcomes in adulthood by Census tract using anonymized longitudinal data covering nearly the entire U.S. population. For each tract, we estimate children’s earnings distributions, incarceration rates, and other outcomes in adulthood by parental income, race, and gender. These estimates allow us to trace the roots of outcomes such as poverty and incarceration back to the neighborhoods in which children grew up. We find that children’s outcomes vary sharply across nearby areas: for children of parents at the 25th percentile of the income distribution, the standard deviation of mean household income at age 35 is $5,000 across tracts within counties. We illustrate how these tract-level data can provide insight into how neighborhoods shape the development of human capital and support local economic policy using two applications. First, the estimates permit precise targeting of policies to improve economic opportunity by uncovering specific neighborhoods where certain subgroups of children grow up to have poor outcomes. Neighborhoods matter at a very granular level: conditional on characteristics such as poverty rates in a child’s own Census tract, characteristics of tracts that are one mile away have little predictive power for a child’s outcomes. Our historical estimates are informative predictors of outcomes even for children growing up today because neighborhood conditions are relatively stable over time. Second, we show that the observational estimates are highly predictive of neighborhoods’ causal effects, based on a comparison to data from the Moving to Opportunity experiment and a quasi-experimental research design analyzing movers’ outcomes. We then identify high-opportunity neighborhoods that are affordable to low income families, providing an input into the design of affordable housing policies. Our measures of children’s long-term outcomes are only weakly correlated with traditional proxies for local economic success such as rates of job growth, showing that the conditions that create greater upward mobility are not necessarily the same as those that lead to productive labor markets. Read the whole paper here. 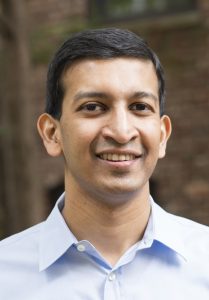 About the speaker:
Raj Chetty is the William A. Ackman Professor of Economics at Harvard University. He is also the Director of the Equality of Opportunity Project, which uses “big data” to understand how we can give children from disadvantaged backgrounds better chances of succeeding. Chetty’s research combines empirical evidence and economic theory to help design more effective government policies. His work on topics ranging from tax policy and unemployment insurance to education and affordable housing has been widely cited in academia, media outlets, and Congressional testimony.

Chetty received his Ph.D. from Harvard University in 2003 and is one of the youngest tenured professors in Harvard’s history. Before joining the faculty at Harvard, he was a professor at UC-Berkeley and Stanford University. Chetty has received numerous awards for his research, including a MacArthur “Genius” Fellowship and the John Bates Clark medal, given to the economist under 40 whose work is judged to have made the most significant contribution to the field.